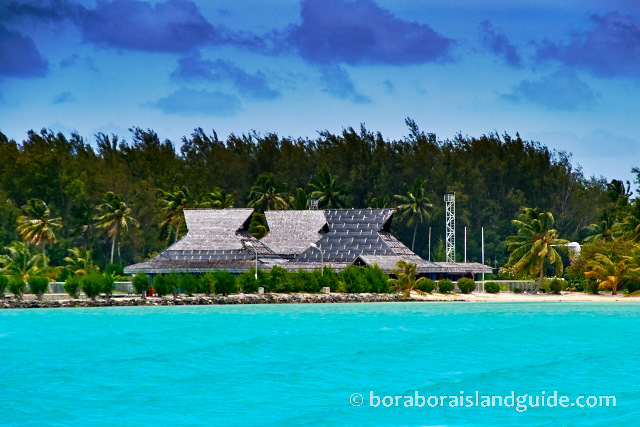 Are you aware that unique Bora Bora Airport is located on it's own islet? Look on the Bora bora Map and you will spot it to the north of Bora Bora Island.

On this page we have everything you need to know for a smooth transit and boat transfer across the lagoon to your resort, or Vaitape on the main island.

Bora Bora Airport is on a Small Island

When you land on the airstrip at Bora Bora after this scenic Tahiti air travel, you may be disappointed it's the end of the flight. Bora Bora Airport has been built on a strip of flat land on a small islet, Motu Mute, north of the main island of Bora Bora. This is one of the small barrier islands that form a ring around Bora Bora Lagoon. The Bora Bora Airport code is BOB.

Stay Awake on The Flight to Bora Bora 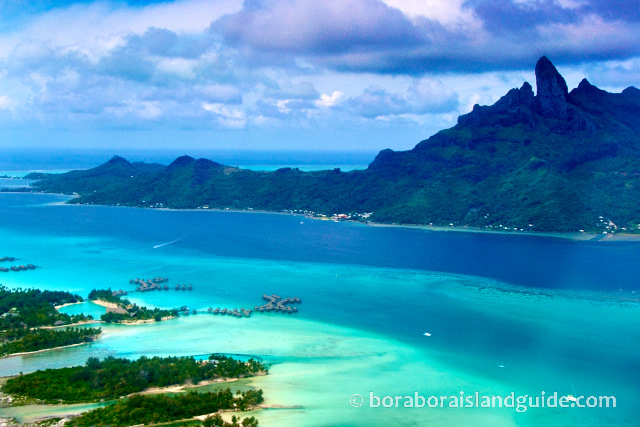 The view out the window arriving into Bora Bora is magnificent

Your flight to Bora Bora will be a thrilling experience as the aerial view of the green, jagged volcanic peak of towering Mt Otemanu appears on the horizen. Surrounded by a captivating, vivid blue lagoon, this sight has moved writers and artists to call Bora Bora 'the most beautiful island in the world'. Find out which side of the plane to sit on for the best views. As you descend, you will be amazed by the many blues of the Bora Bora Lagoon. You can clearly see the Bora Bora resorts extending out over the lagoon, with their wooden walkways connecting to thatched-roof over water bungalows.

Bora Bora Vacations begin with international flights to Faa'a Tahiti Airport in Papeete. From there Tahiti air travel is with the Air Tahiti airline, so this will be the Bora Bora airline for your inter-island flight. Bora Bora is an easy 50 minutes away from Papeete. Air Tahiti has a minimum of 5 flights to Bora Bora each day. 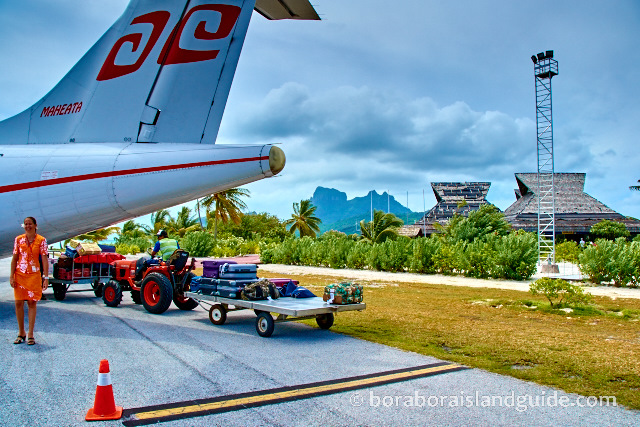 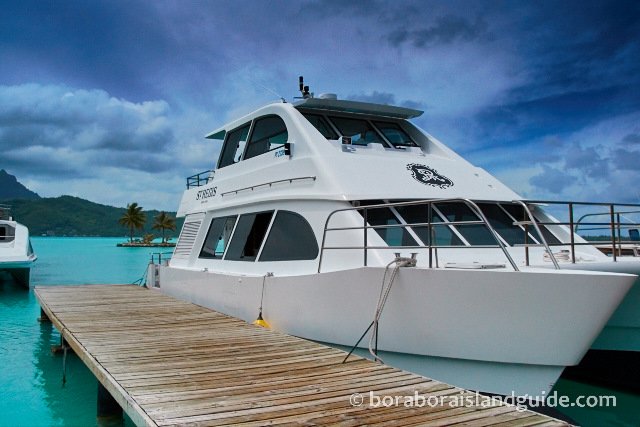 Air Tahiti passengers arriving on Motu Mute use boat transportation from the airport pier to get to their hotels. Everyone should check that their luggage is loaded on (or off) the boat at the airport. Air Tahiti includes the cost of the 25 minute catamaran ride to Vaitape wharf with flights to Bora Bora.

When you exit the airport building you will wait on a pier and be dazzled by the view across the blue lagoon to exotic Bora Bora Island.  The luxury resorts have their own private shuttles to escort you directly to your destination in style (at a charge). When you are arranging your Bora Bora vacation, book transfers from the Airport to your resort. On arrival at the airport, report to the hotel desk. Guests are welcomed with a beautiful lei that signifies a resort and ensures that you get on the right boat. Or if you would like to have the convenience of transfers but save some money, book your own transfers online for a reduced price.

Extend your Bora Bora vacation with other Polynesian flights

This Gateway to Paradise was Built for
World War II

During World War II Bora Bora Island was considered a strategic location because of it's position in the middle of the Pacific Ocean. In response to the attack on Pearl Harbor in December 1941, the United States of America built the island's first airfield on Motu Mute. The military used the island as a supply base and about 5,000 GIs set up huge naval guns to defend the territory if Japan launched a surprise attack. The guns were never fired and after the war ended it took years to evict some of the soldiers who did not want to leave.

This little runway on Motu Mute became remote French Polynesia's main connection to the outside world. In 1958 the first commercial flight arrived from Paris, France.

Passengers were transferred to Papeete by sea. Bora Bora's air strip continued to be used for international flights until the current Tahiti Faa'a Airport was finally built and opened in March 1961. Today Bora Bora Airport is a regional hub for the Bora Bora Airline, Air Tahiti and is the gateway for guests coming to enjoy the most beautiful resorts in the South Pacific.