Traditional Tahitian dancing tells the ancient legends and folklore of the Polynesian culture.

These dances were considered so sensuous, that they were banned by the missionaries in the 1800's! The restrictions by the French Administration were only removed in 1908. Tourism has now helped Tahiti culture revive its Polynesian dancing.

The Tahitian dance costumes are colorful and creative. The dancers change costumes for each rhythmic dance, so you get to see amazing variety. The costumes are hand-made made from grass, palms, tropical flowers, mother of pearl, seas shells, feathers, and coconuts. Colorful skirts, belts, bras, jewelery and large headdresses are created. 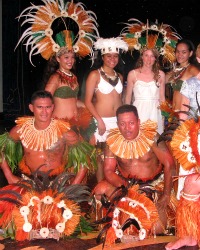 That's me in the white dress!

Tahitian Dance moves to the beat of drums, flutes, conch shells and ukuleles. The music styles that Polynesians dance to varies. They express everything from relaxing island-style to intense warrior sounds.

Here are some dance styles that you will see:

Experience Tahitian dancing on your Vacation

Tahitian Dance is mesmerizing. The dances can be slow and sensual or fast-passed and vigorous. Watching the graceful island women and the strong men dance to the Tahitian music in their traditional costumes is a must-see activity while you are on vacation. It gives a beautiful insight into the Tahiti culture. 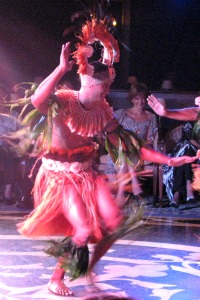 Traditional dance performances are held at many of the Bora Bora resorts. If your hotel does not have a show, visit a resort on the main island to enjoy this unique experience. Tahitian cultural dancing shows are held around 8pm at the resorts restaurants and bars. Some shows can be watched by purchasing a cocktail from the bar, others you will need to have dinner. Check with the resorts before you go to the shows, as the shows can be canceled if there aren't enough guests staying at the resorts.

Tahitian shows on the main island: 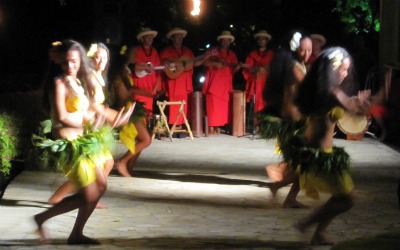 Tahitian shows at the motu resorts: