Tahiti islands are made up of five island groups known as archipelagos.

When you see picture postcards of the islands of Tahiti they are most likely from the three most visited archipelagos:

The Tuamotu Atolls, which are coral­formed rings of land, around large pristine lagoons; including the atolls of Rangiroa, Manihi, Tikehau, and Fakarava.

The Marquesas, which feel like untouched lands and at the end of the earth.

The Society Islands are the most visited and easiest to access of the island groups. We know them as Tahiti, Moorea, Huahine, Raiatea, Taha'a and Bora Bora.

Tahiti, the largest and most populated island in French Polynesia, has become the main island. Everyone (except those arriving on private jet) must fly into French Polynesia through the international airport in Papeete, the capital. All other Tahiti islands can be accessed from Papeete, flying with the inter island carrier, Air Tahiti.

Tahiti has many volcanic black­-sand beaches, and a few white­sand beaches can be found on the east coast. The world famous surfing break, Teahupoo, known for the yearly Billabong contest, is off the main island of Tahiti. The large, exotic inner island has waterfalls which can be explored on foot, or viewed by helicopter. It's easy to hire a car and drive around the road that circles the coast, stopping off at sites along the way. 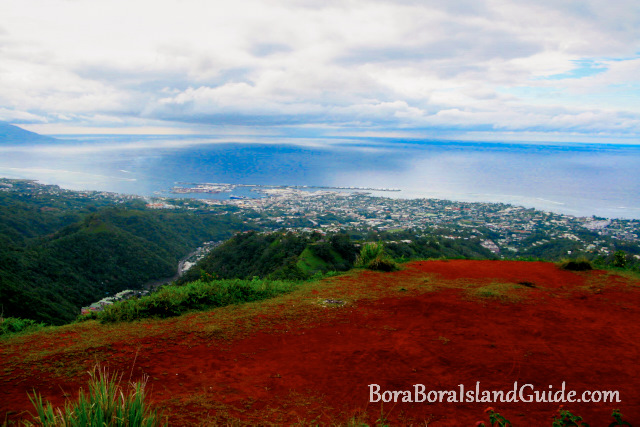 Looking down to Papeete, the capital of Tahiti

Tahiti has a large inner island with waterfalls that can be explored on foot or viewed by helicopter! It is easy to hire a car and explore the circle island road around the coast, stopping off at sites along the way.

Moorea is a quick ferry trip (1 hour) or plane ride (15 minutes of awesome views) away from Tahiti. It has a dramatic inner island landscape, and is the favorite vacation spot of Tahitians. Moorea has gorgeous over water bungalow resorts set in some of the loveliest locations in Tahiti. 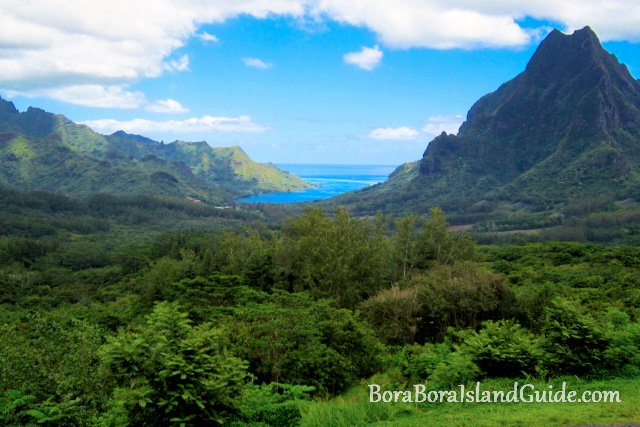 Tahitians say Moorea is the most beautiful island!

Huahine remains pristine and wild. It's Circle Island Road made of shells was only paved a few years ago. There are very few resorts here, and few tourists visit. So this island is a lovely, relaxing place to feel a connection to the real Polynesian way of life. 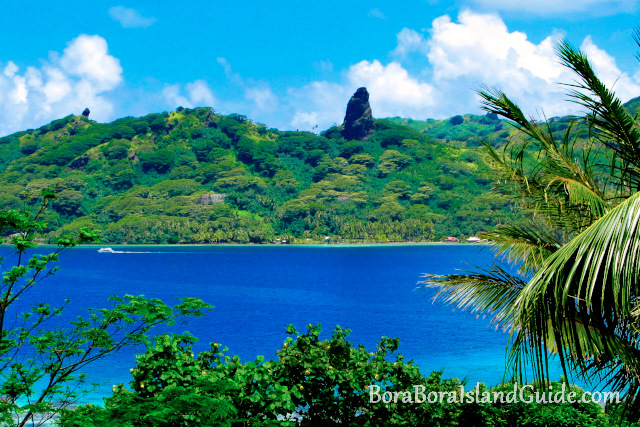 Raiatea is known as the most sacred island in Tahiti because it has many historical sacred sites. It is believed to be the original place where Polynesians arrived at French Polynesia, in their sea-faring canoes. Today Raiatea is a main hub for sailing. If you vacation in Tahiti on a cruise ship,

Raiatea is the only island (apart from the main island of Tahiti) where the ship can pull right alongside a dock. 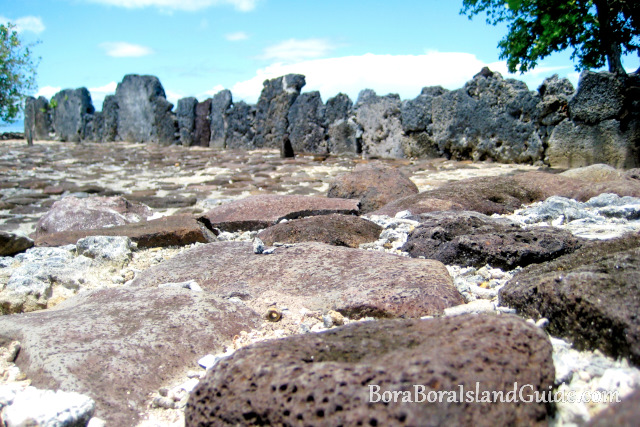 A sacred site on Raiatea with a dark past

Taha'a is nicknamed Vanilla Isle, as the aromatic scent perfumes the air. You can even visit a vanilla farm where the plants are grown in the natural jungle setting, rather than by the modern cultivation method of training them up sticks. Tahitian vanilla pods are the tastiest on the planet.

Taha'a is also home to many boutique, pearl farms. We have been 'wowed' by some of the most delicate colored Tahiti pearls, while touring a Taha'a black pearl farm. My favorite 'snorkeling in Tahiti' adventure was on an excursion in Taha'a. We drifted with the current flowing between the outer motus, passing through colorful coral gardens, spotting the largest numbers of neon fish that we have seen anywhere in French Polynesia. 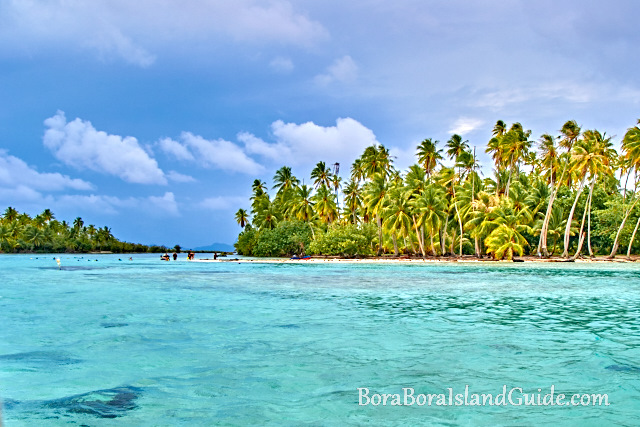 My favorite snorkel is through this passage!

Bora Bora, often awarded by travel magazines as 'the most beautiful island in the world', is truly the Pearl of the Pacific. Bora Bora is a dream honeymoon destination and it's seductive charm attracts vacationers from all over the world. Bora Bora vacations are famous for over water bungalows, white sand beaches, and luxury resorts. 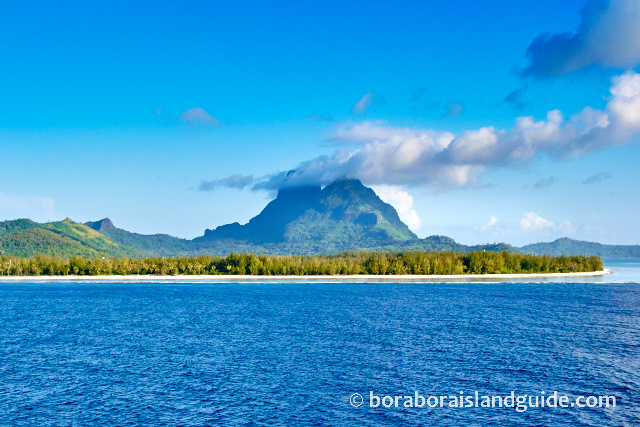 The Tuamotu Atolls include Rangiroa, Manihi, Tikehau and Fakarava. These atolls have pristine lagoons teeming with all sizes of marine life. If you're planning a Tahiti diving trip you'll find some of the best diving in the world here. This is a great place to visit a black pearl farm. Until the first black pearl culturing in the Tuamotus, these lagoon gems were so rare that they featured in legends. Now you can 'shop till you drop' buying black pearls in Tahiti. If the Tuamotus is not in your vacation itinerary, you can find some of their best black pearls in Tahia's exquisite jewelry. 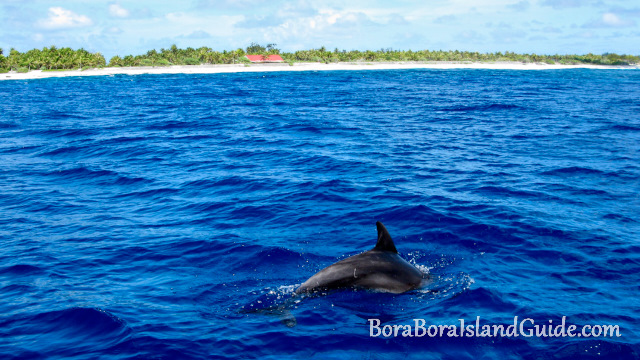 A wild dolphin swimming past Rangiroa 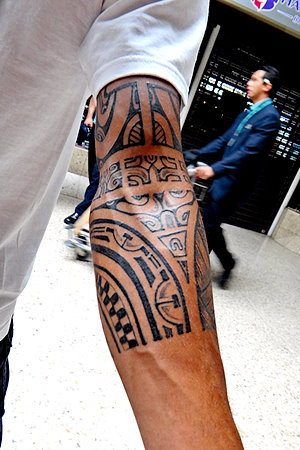 Out in the Marquesas, Nuku Hiva and Hiva Oa offer the best accommodation for tourists. These untamed Tahiti islands have towering mountains and volcanic cliffs where water seems to fall from the heavens. The rugged beauty captured Paul Gauguin's eye, and he chose Hiva Oa as his inspiration for painting, during the last years of his life.

The isolation of these islands has enabled their proud culture to thrive. Every 4 years they hold a lively festival which continues for weeks. If you want to go, Air Tahiti will fly you there fast. Or you can taking the slow ocean highway, on Aranui, and have the most intriguing days of your life.

Until recent times, there was little contact with other islands. When missionaries made Tahiti tattoos taboo, original designs gradually disappeared in the Society Islands. In the isolation of the Marquesas, artists could continue to use and teach this meaningful, traditional art form. It's a great place for having a Polynesian tattoo applied.

The remote Austral Islands are spread across the Tropic of Capricorn. Whales live in the ocean around these islands, from July to November. The Polynesians here lived very independently. To meet their needs, they developed elaborate skills in weaving coconut and pandanus leaves into beautiful hats, bags and mats. Four of these Tahiti islands offer the home hospitality of small family pensions; Rurutu, Tubuai, Raivavae and Rapa.

Through time, travelers have referred to the far flung Gambier Islands as "At The End of the World". On these Tahiti islands you can still see the original stone buildings constructed by the first nineteenth century missionaries.

The island of Mangareva has most of the area's population. Some of Tahiti's largest pearl farms are set up in Mangareva's lagoon. The more pure and nutrient rich the water, the happier and longer the oysters live to produce additional pearls.

We might be biased, but our favorite is Bora Bora!