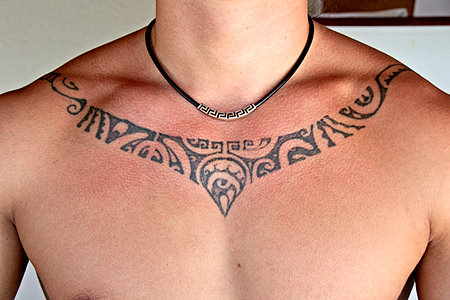 French Polynesians use Tahiti tattoos in a meaningful way.

In ancient Tahitian culture there were strict religious and traditional codes governing the use of tattooing. The early missionaries decreed it a pagan custom and banned the art-form. Today Tahiti tatou graphics reflect aspects of your life and are an expression of who you are and what is important to you.

Traveling around 'Tahiti and her islands' we admired artful Tahiti tattoos on so many people. Legs, arms, backs, chests and necks are patterned. There's a tattoo renaissance! The majority of working age people are tattooed. It's hard to believe that 100 years ago nobody in the Society Islands had tattoos. Due to missionary zeal, it was a dead art. But in the last 2 generations it has revived. After making friends with locals, we discovered that a Tahiti tatou is not merely decoration. In the Tahitian culture it is a powerful expression of who they are.

“My life Decides My Tahiti Tattoos”

On Moorea we took a whale and dolphin watching cruise with Professor Michael Pool. During the trip I was fascinated by the beautiful Tahiti tattoos on his agile, topless, assistant, Sommer, who is a 'Behaviourist' and was manning the boat which brings in funds for research. Later Sommer described how they were chosen.

“This is a representation of my favorite hobby, when I was a kid. See the fishing hooks. They're upside down because I don't fish any more. I protect the fish.” 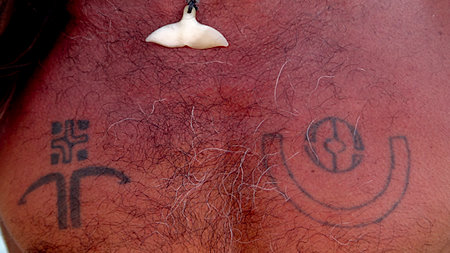 See his upside-down fishing hooks on the left? And Ta'aroa lower shell on the right 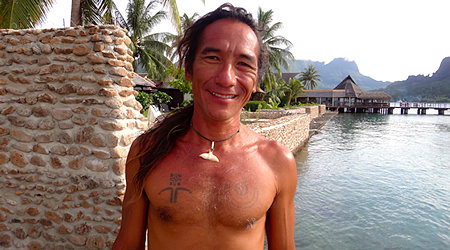 “I should have my family motifs on my forearms. I don't have them because I was working in the U.S. and I had to hide my Tahiti tattoos. They under-estimate people with tattoos. I should have 3 spears on my chest as I am a veteran of the first gulf war. At 25 years old I went into obligatory service in the French army in the French African territories.”

“I came back to my first love, the ocean. It cools me off, calms me down. I should have it on my butt, that's where I sit to rest. It's on my shoulder because I support the ocean. The left side is my feminine side. It's on my left nurturing side because taking care of the ocean is love. The right side is the masculine side, the warrior.” 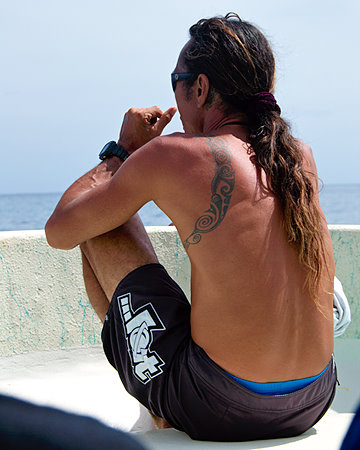 Sommer supports the ocean on his shoulder

Sommer explained that it's important to talk to the tattoo artist, who doesn't always do it right away. He knows people who have been told (after 4 hours of talking) that they're not ready for Tahiti tattoos. He believes it's wrong to take motifs from other families without their permission. Although today you can usually get away with it, except in New Zealand where it's considered a big insult in Maori culture. 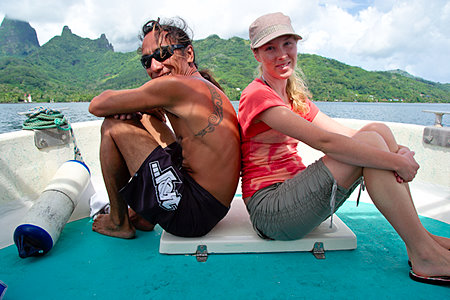 Sommer and I on look-out for the dolphins

“An Expression of Who I Am”

We first met Tony while staying at the Hilton (now the Conrad Nui). He was managing the beautiful Hina Spa where I went to experience an amazing hot stone, cold shell, Polynesian massage. The Hilton Bora Bora Nui Resort spa is set on the hilltop amongst sacred black lava rocks spewed out at the birth of Bora Bora. Tony is a highly intelligent and practical man with a deep and soulful side. He has taken an interest in Tahitian culture. Previously he managed the Pearl Beach Manea Spa. As there were few requests for manicures or pedicures he changed an aesthetics room and the Manea spa became the first in Bora Bora to offer Tahiti tattoos.

Tony shared the significance of his own Tahiti tattoos with us. “This is the symbol for Mana, the life force of Tahiti.”

“These 2 represent my children. My first born son. At the time my 2nd son was in my wife's belly, so here's the wifeliness.” 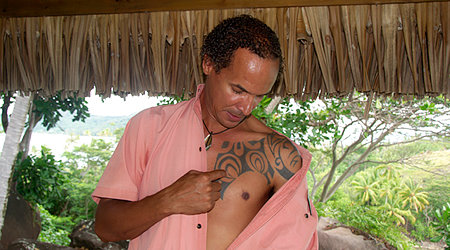 Tony pointing to his son in his wife's belly

At his second session he got the symbols for things like water, and affirmations for qualities like power. He thought he would be a finished work of art. But the tattoo artist said, “No, you haven't arrived!”

He's very proud of his Tahiti tattoos which were done in traditional style, with the carved tusk of a boar. I asked him if it was painful. He said, “There was a lot of sensation. But a guy is holding you down and stretching your skin, giving you energy. It's a comb, so the ink has to be re-loaded. He dips it in and stops to look how it's going. There's time to regain composure. Luckily he's also a drummer so he has good rhythm. Tut ta tut ta tut. The modern method with the gun is 45 minutes or 2 hours or 4 or more, of constant annoyance, not as specifically painful, but it builds up.”

Thinking of getting your own Tahiti tattoos on vacation?

Here's practical information you must know about when to get a tattoo, how it will be applied, and how to care for a new tattoo.

Go to an esteemed professional who is both knowledgeable and intuitive at helping you decide what you would like your body art to say. The artist must also be skilled at creating and applying designs. Here are Bora Bora and Tahiti tattoo artists who have reputations for excellence.