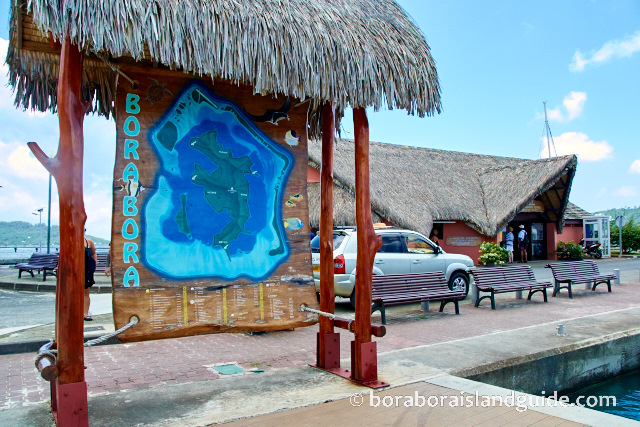 Here are directions to enable you to locate the main Bora Bora attractions while traveling around the scenic Circle Island Road. If you look at the Bora Bora map you will see that it is the only main road. This 32 kilometre (20 mile) road winds around the fairly flat perimeter of Bora Bora Island and is mostly paved.

If you're wanting independent things to do in Bora Bora, you can easily hire a bicycle,  scooter or car and enjoy the scented tropical air while you see the Bora Bora points of interest.  We think the best way to tour the Circle Island Road is on an eco-friendly, silent electric car! Begin at Vaitape and head south.

This is Bora Bora's main town and wharf. It has the Banque de Tahiti, a Post Office, a few shops and cafes, and a Protestant church. The monument at Vaitape Wharf is to Alain Gerbault, the first Frenchman to sail his yacht around the world. (He passed through Tahiti in 1926 and returned to live in Polynesia between 1933 and 1940.) If you step a-shore from a boat, the tourist office on the right side of the wharf has information about Bora Bora attractions. 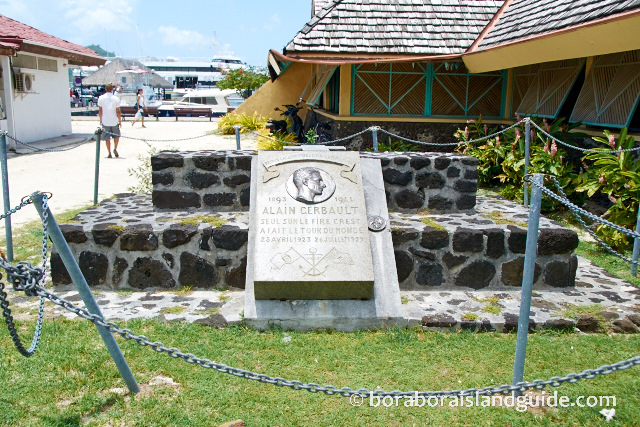 At the head of Pofai Bay, across the road from Galerie d'Art there is a barbed wire fence around some military items that were left behind after WW2. You can see two massive anchors and a gun taken from Tereia Point.

Shortly after passing the Bamboo House Restaurant (and 100 meters before Bloody Mary's) there is an unmarked dirt road (watch for the double electricity pole on the corner) that leads to a 4 wheel drive route with concrete tracks. It's a 10 minute hike up the hill to the TV tower. From there you get a fantastic view of the southern end of the island and the lagoon. 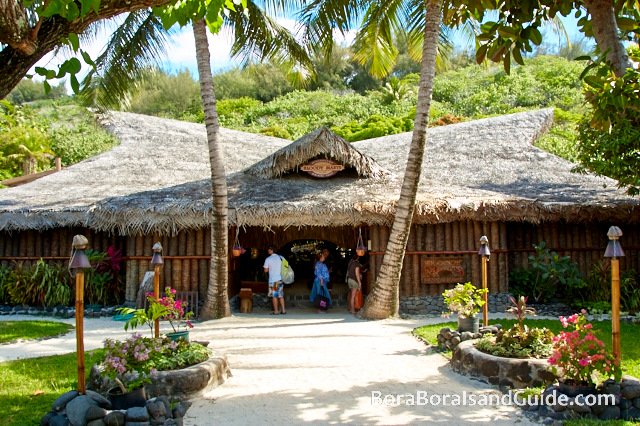 You'll know Bloody Mary's Restaurant and Bar is coming up when you see a romantic pier for boats to dock. This is the most famous of the Bora Bora attractions so step inside to see the renowned wall with a list of celebrities that have dined there. Sit on a palm trunk stool to sip a Tahiti cocktail and soak up the tropical setting.

A few minutes south of Bloody Mary's you'll arrive at Matira Beach, one of the most popular Bora Bora attractions. Matira Beach is the only public beach on the main island. Matira's 2 kilometers of inviting white sand stretches from the east side of Hotel Bora Bora to Matira Point. The coral heads below the Hotel Bora Bora (currently closed) attract colorful tropical fish. Snorkeling is one of my favourite things to do in Bora Bora and this is one of the best spots for snorkeling in Bora Bora. 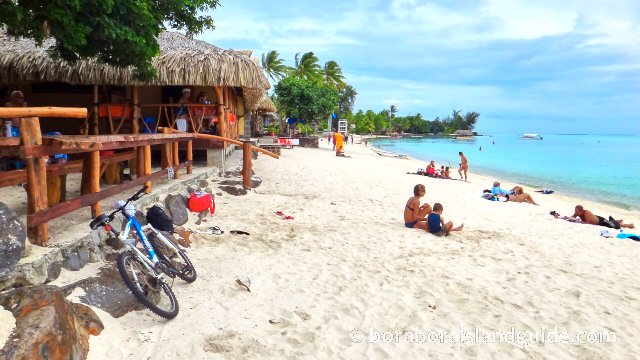 It's surprising to find that canons from WW 2 are Bora Bora attractions, as this peaceful island is such a place of beauty. Take the path just past Hotel Matira. Stay on the east side of the bungalows and it will lead you to a ridge above the restaurant where two American naval guns are poised. Enjoy the great view while you're up there.

The most popular of Bora Bora beaches, Matira Beach Park, is straight across the road from the Intercontinental Le Moana Resort. You will see a huge open thatched pavilion in front of the beach. 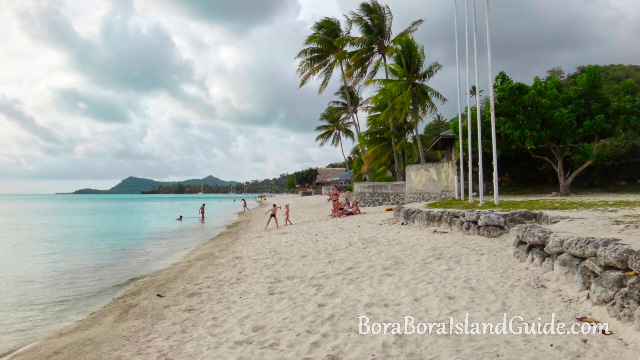 Either walk along the sand from Matira Beach Park to Matira Point or turn right from the main road when you see the signpost to the Intercontinental Le Moana. After you see the hotel on your left, keep going to the end of the track. You can wade from Matira Point out to the reef at low tide. The shallow areas created by this reef stop yachts from sailing right around Bora Bora Island.

This section of the road between Matira Beach and here has more galleries, shops, hotels and pensions than any other area on Bora Bora. The road winds uphill past Club Med, which is presently closed. When you see two general stores and a school, you will know you are going through the village of Anau.

On the north side of Varou Bay the road climbs a ridge. When you are halfway up the slope, look down on the right to see the ahu of Marae Aehautai on the shoreline. There are three maraes in this area and this is the most intact. The road does not wind around Fitiiu Point so to see the Bora attractions in this fascinating area you need to hike around it. There is an incredible view of Mount Otemanu from the marae. Look carefully and far up on the side of Otemanu you can spot Te Ana Opea cave.

There are 2 more American guns on the point. To visit them, look for the rough 4x4 track which goes to the right at the top of the ridge. Walk a few hundred meters until you come to a massive black boulder and sight the guns from there.

To the north of Fitiiu Point you will pass the Revatua Club, a small restaurant overlooking scenic Haamaire and Taimoo bays.

Located shortly before Taihi Point, this small museum houses a collection of model boats related to Tahiti's history and exploration. It is often closed (Tel. 67.75.24) and entry is by donation.

The lookouts are favorite Bora Bora attractions for photographers. Just before Taihi Point there is a short 4x4 road which gives an opportunity to walk to a lookout for a great lagoon view. Down past the point you can see the remains of the Hyatt Regency hotel building site which was left unfinished due to lack of finance.

As you pass Tereia Point you can hunt for another WWII gun. When you see an old ferry jetty look for a concrete tank. Hike up the hillside to find an American canon above the tank. Along the north shore of Faanui Bay you can see the remnants of several concrete wharves built by the Americans. Most of the soldiers were billeted in this area. 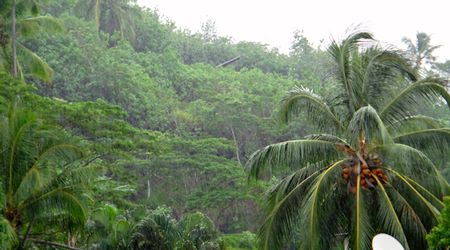 Can you spot the WWII Gun?

Ancient maraes are the most valued, historical Bora Bora attractions. This one has petroglyphs of turtles carved into the huge coral stones of the ahu. The ancient islanders believed that turtles were the favorite food of the gods, so they offered them on the maraes. This interesting marae can be seen on the lagoon-side of the road, just after the small boat harbour which was an American submarine base during WWII. 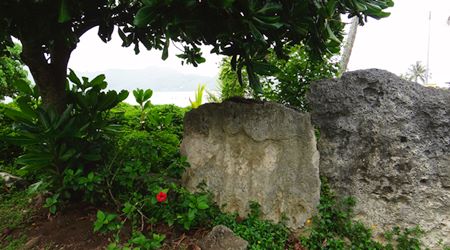 At Faauni bay village there is a lovely church standing graciously at the head of the bay. Here you will find a unique side road which heads directly away from the coast. Travel down it to experience the thick tropical vegetation of inland Bora Bora. 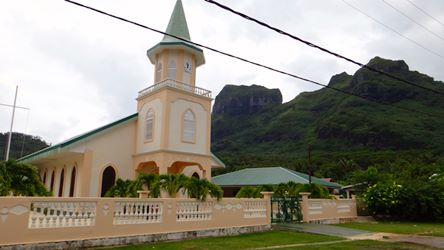 After Faauni watch for this large archaeological site. It can be seen on the hillside, before you get to the Brasserie de Tahiti (Coca Cola and Hinano) depot. The entrance is difficult to locate, but this marae is well maintained, so if you want to take photographs, walk along the road to find your way in.

Built by the American marines during WW2, this untidy wharf is Bora Bora Island's deep water wharf for servicing large ships. Near one end there is a restaurant and behind it, on the point, is the most important of the archelogical Bora Bora attractions, Marae Marotetini. It's west of the wharf and at low tide you can walk along the shoreline to find this massive 25 meter long ahu. Marae Marotetini's highest point is 1.5 meters. This treasure was restored in 1968 by Professor Yosihiko Sinoto.

After you pass Farepiti Wharf, scan the right side of the road for a sign indicating the Bora Bora Yacht Club. It has a pleasant bar and you are welcome to drop in for a drink. This is a place for sailors to moor and resupply their boats.

These 2 guns up on the hillside are highly searched for, hard to find, Bora Bora attractions. They face Te Ava Nui Pass, as they were positioned to defend it. Keep a careful eye on the hillside between Farepiti Wharf and Vaitape. Look for a concrete road (before you reach Otemanu Tours). Turn and go a little way up it. Watch for a path because from here it's a hike up the ridge to the guns. If you meet anyone, ask for permission, as this is private property.

With these instructions in hand, the adventurous can follow the Circle Island Road and enjoy the fun of discovering the Bora Bora attractions. If you prefer to have an organized tour whisk you around, there are guided Bora Bora tours to take.