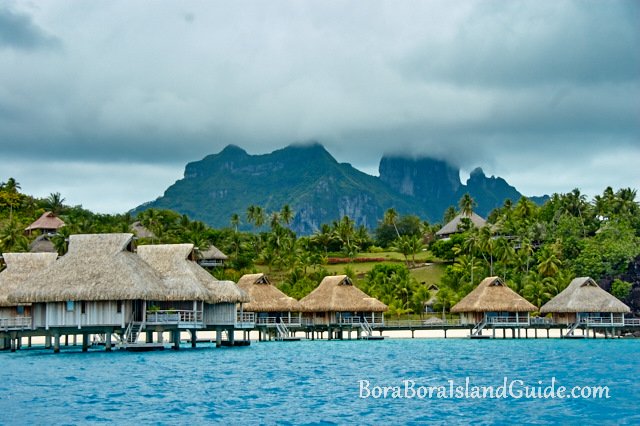 Low season is summer time in Bora Bora so the island is at its most hot and humid at this time of year. This will not deter those who live in a warmer climate from vacationing during summer weather in Bora Bora. Some of you may want to bring anti-frizz products for your hair if you are visiting Bora Bora over these summer months.

At this time of year the island is at it’s most lush, with the foliage bright green and tropical flowers blooming. If the sun god shines down on you it’s possible to have gorgeous sunny warm weather for centering your vacation around the legendary lagoon.

If you are someone who perishes in heat, try visiting Bora Bora in winter time when it’s slightly cooler, as there’s not much air conditioning in Bora Bora. Resorts have attractive island-style, open-air set-ups that utilize natural air flow, and provide amazing views. Your bungalow will be one of the few places that has air conditioning, and the paths to hotel facilities are long.

Low season months in Bora Bora have the highest rainfall. Usually rain falls in the night or as short, passing showers during the day. But it’s also possible for rain to set in for days in a row. We once found out what that’s like, staying in early January.

If you are planning to travel to Bora Bora over this time of year, March generally has the least amount of rainfall. We have vacationed in Bora Bora during December and early January, a couple of times, and have experienced both wonderful weather and windy, rainy weather. It’s the luck of the draw at this time of year in Bora Bora, so you will just have to decide if it is worth accepting the weather you get, to save money. If the December to January break is the only time you are able to escape work, don't worry – it’s possible to have beautiful summer weather in Bora Bora – we have experienced it ourselves.