The best beaches in Noumea for swimming and sunning are along Anse Vata Bay and Citron Bay. During our 2 week vacation we lounged on many different beaches and found favorites for each time of the day.

A scenic promenade wanders for kilometers around Anse Vata and Lemon Bay, providing a safe walking track and connecting the best beaches in Noumea. The entire area has a lively feel as it's enjoyed by holidaymakers, French residents, and islanders. You'll see many happy families cooling down here.

Although the sand edging the lagoon, along Anse Vata Bay, is quite narrow there's also a strip of shady park between the promenade and the sand. Many people utilize this to relax on lawn, under part shade of palms, rather than being in full sun on the sand. 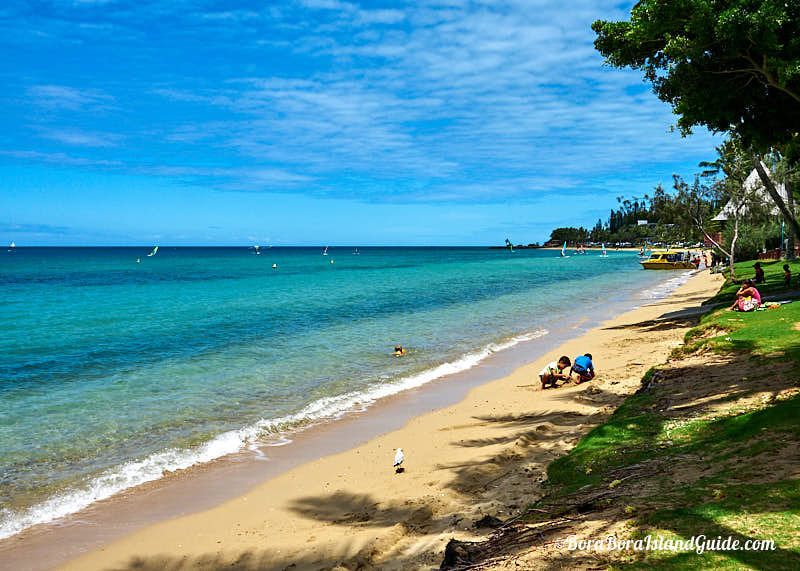 Anse Vate beach has both sand and park for relaxing. 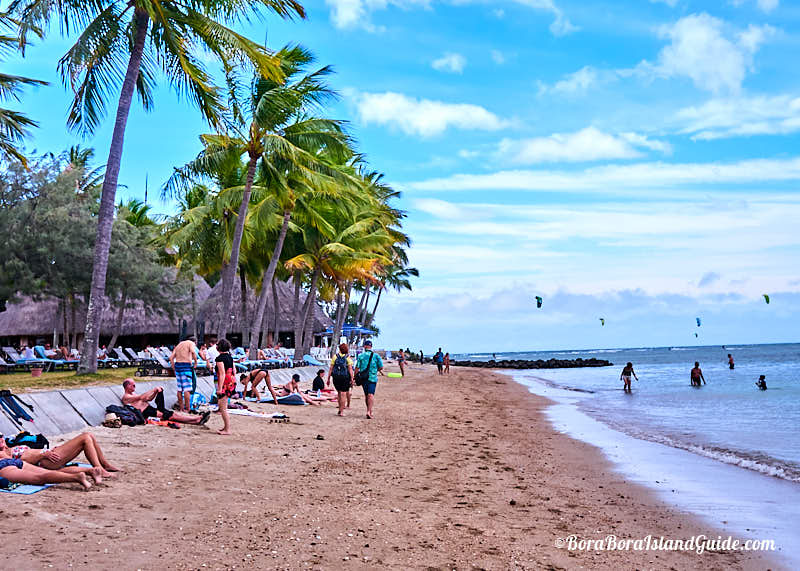 Le Meridien's beach has a wider strip of sand than Anse Vate, plus kite-surfers for entertainment.

The beach in front of Le Meridien is considered the best on the island, not just for it's sand and the smooth floor in this part of the lagoon but because Magnin Point actually shelters it from the wind. We quickly learned that on most days, after 11am, the further we walked from the point (towards the Hilton), the windier it became. 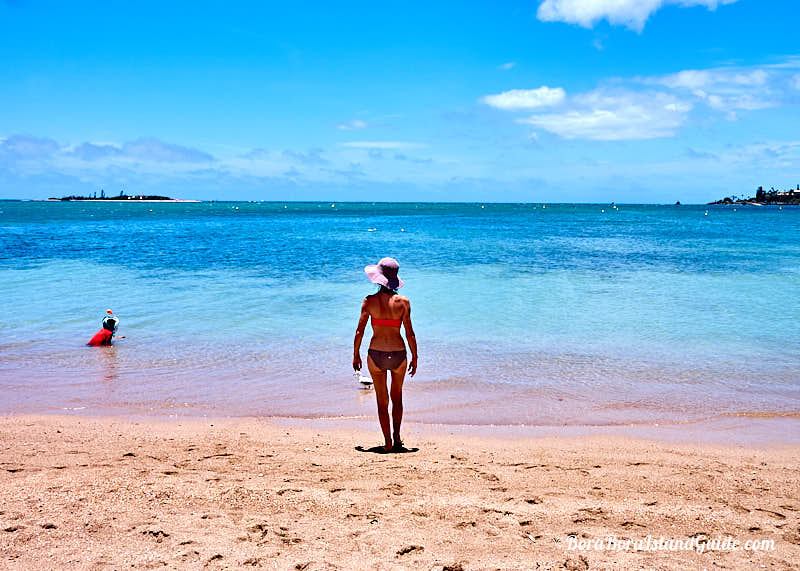 Le Meridien Beach is great for swimming as there is less coral in the water.

We noticed that cruise boat passengers are shown the "best beach in Noumea". So, if you lay your towel on it's sand during holiday season or weekends, you may have tourists almost tripping on your toes as they tramp by (often feet fully clad) to see the beach and watch kite-surfers in action. You won't have to share water space as the cruise ship folk just seem to be looking. After pointing their cameras at sea gulls and such, they disappear. 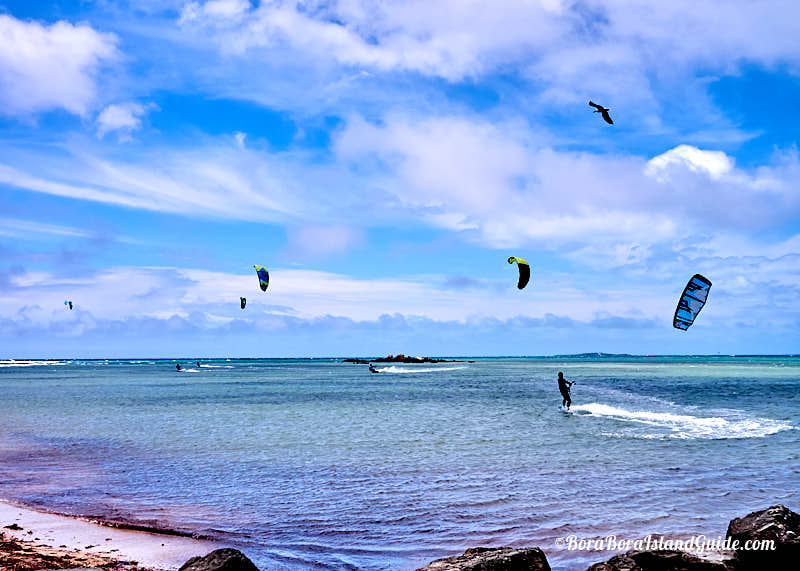 Lie long enough on the Le Meridien beach and you'll think it the kite-surfing capital of the world.

Near the point, on LeMeridien beach, there's a breakwater which is the most popular take-off route for kite surfers. The beach around the corner, past the point, is extremely windy and most days the wind began blowing there by mid morning. The lagoon would come alive with colorful kite-surfers flying around.

The Anse Vata area of the island experiences frequent wind, which keeps it cooler and makes it a magnet for lovers of wind sports. Early mornings are calm so it's the best time to head to the beach. To find a quiet place for swimming and sunning we walked along the promenade to the west of the Hilton, looking for a clear water spot with a sandy bottom.

We went past the place where people were waiting for water taxis that take off for Duck and Mater Island. Next we crossed the section of beach where beginner windsurfers hone their skills. We didn't go as far as the (burnt down) Fun Beach Restaurant, as storm water was running into the lagoon, in two places, near there. After a swim and a short sunning on the sand we moved onto the lawn to linger in part shade.

It took us a few days to find the best beaches to go to, after the wind had whipped up in the afternoon. They
were in opposite directions: we could walk up to the strip near the Le Meridien or head around to the sheltered,
bigger beach at Lemon Bay.

Lemon Bay has a very long beach with a liberal spread of sand. Like Anse Vata Bay; it's bordered by a strip of lawn with large, shady trees. This is the favorite beach of islanders and French residents as there's more space than at other beaches in Noumea. Across the street from the beach there's an interesting mix of restaurants, cafes, bars, and shops (including a scrumptious natural ice-cream store) which also attract many people to the area. 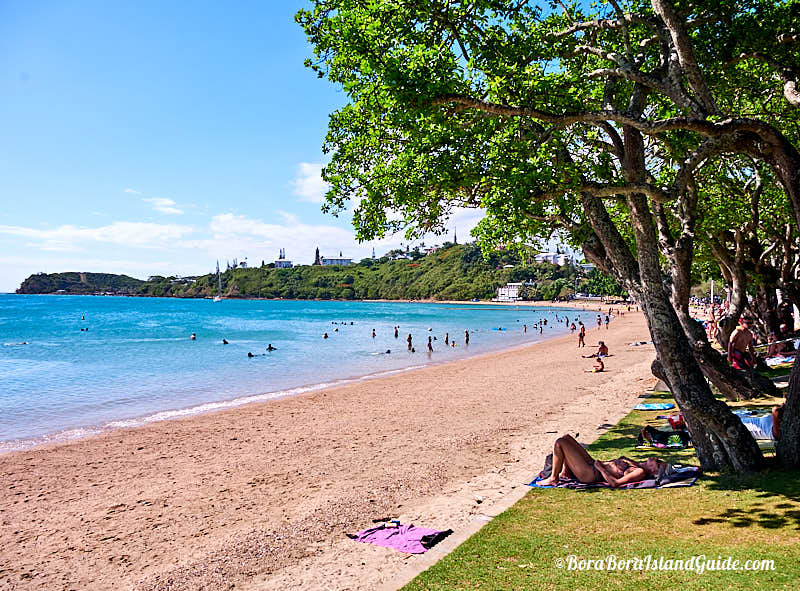 Lemon Bay is a unique combination of beach and park with interesting eateries across the road.

This is a great place to relax because it's easy to pop across the street for a drink, an ice cream, or lunch. Parking a car is a matter of luck, but if we drove over, we could always find one around the corner near Casa del Sol. Reef shoes are essential at Lemon Bay as the sandy floor is littered with coral and stones which can hurt the feet.

The presence of many local French families provided lovely entertainment on the beaches of Noumea. We were so intrigued by the impeccable behavior of the young children that we bought a book on French parenting.

Duck Island offers a private beach experience, more like we've had in Europe.

If you're looking for a little excursion, there are frequent water taxis heading to and from Duck Island. Out
there you can hire a sun lounge under a red umbrella and relax with gorgeous views back to the main island. 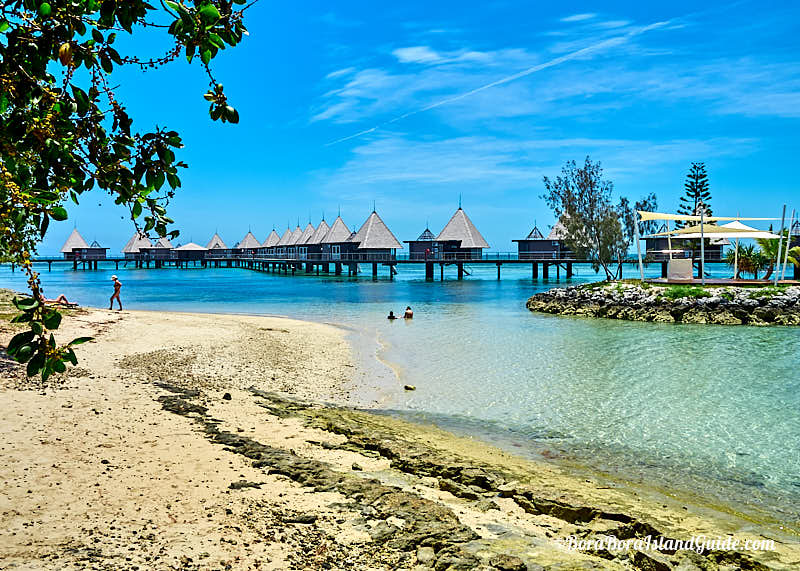 Take a boat to Mater Island and have a resort beach experience for the day.

Mater Island has a stretch of white sand beach with shallow water and coral. This offers better opportunities for snorkeling than any other of the beaches in Noumea that we tried. For a fun day out you can take a picnic lunch and buy a boat ticket from the booth on the beach between the Hilton and Casa del Sol - or buy a ticket that includes a smorgasbord  lunch at L-Escapade resort. Do this on a day when there's no cruise ship in port. 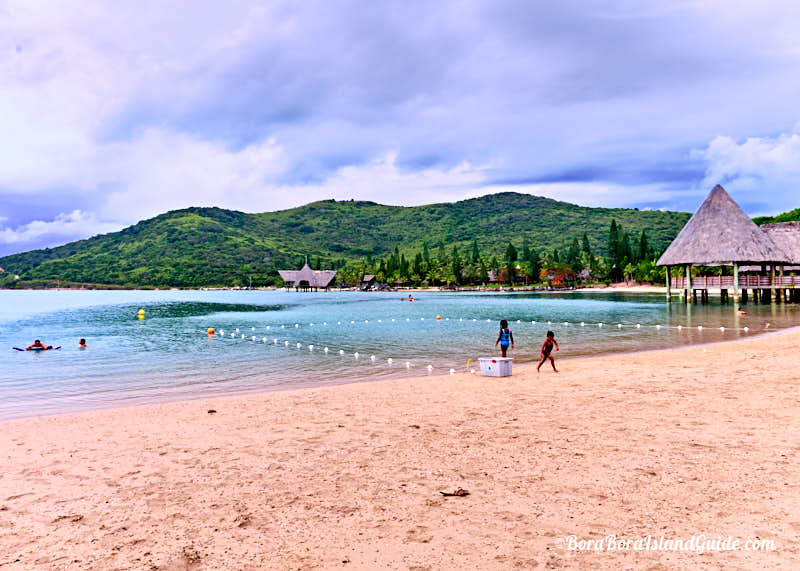 The local's play the music loud on the weekends on Kuendu Beach. This beach, just 10 minutes out of Noumea down town is a hot spot for local families and friends to meet on the weekend. The bay is calmer and more sheltered than Anse Vata beach and the water is shallow for a long way out.

With the shallowness and the seagrass in the area, it is not an ideal snorkeling beach. Make sure you take reef shoes to this calm beach as stone fish have been seen lurking on the bottom. Tricot raye snakes are also common in this area.

How do the beaches in Noumea compare to Tahiti?

For the picture postcard beaches that you see in New Caledonia tourism ads, you will need to venture outside of Noumea to one of the outer lying islands, like Isle of Pines. The presence of the Tricot Raye sea snakes made me cautious while I was snorkeling and swimming in the beaches of Noumea. I didn't see any thankfully, and Tom my husband only saw one while he was windsurfing. It is for these reasons, the beaches of Tahiti are much more preferable to us for a vacation.