Who's the Guide to Bora Bora Valley of the Kings?

Meet the guide who leads hiking tours through the Bora Bora Valley of the Kings. His walk reveals fascinating facts about early Bora Bora's culture and provides pleasurable foraging for wild tropical foods along the way. His story ignites imaginations and touches hearts.

Post Card View of Bora Bora Valley of the Kings

We didn't know it at the time, but Mum and I had sat at the Pearl Beach Resort mesmerized by the view which outlines the ancient Bora Bora Valley of the Kings on the main island. It wasn't on our map until Azdine marked it there.

When Azdine was a young student in France, his father put a poster of this same view across to the Bora Bora Valley of the Kings on one of his bedroom windows. Papa's intention was to motivate his son to study hard so that one day he would be able to travel to exotic far away places.

For 15 years Azdine dreamed of coming to French Polynesia. He pictured the tropical jungle and the lagoon. He planned to build a house of coconut palm on the beach, fish, and pick fruit. 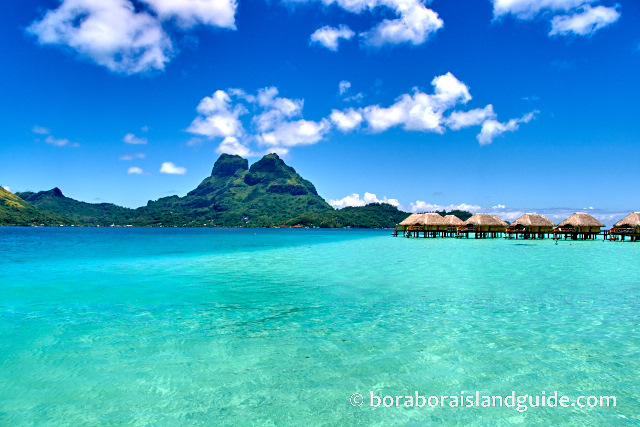 Journey to the Mountain

In 2003, with his life in a backpack and 20,000XPF, a young Frenchman, whose parents had immigrated from Morocco, set out to find Paradise. When he arrived in Papeete he cried. It was a big city! What he had seen on TV wasn't real. And everything was expensive.

He worked in a restaurant and convinced the government to accept him for training in Tahiti as a Polynesian hiking guide. The year long course taught intensive archeology, biology, anthropology and geology. The school held a competition as an incentive for students to meet their commitments. Azdine won, as he topped the course. He was given the privilege of choosing the island he wanted to live on.

In December 2005 he arrived in Bora Bora. For 6 months he worked in a restaurant at night, and during the day explored the wild, inner island. He knew that when you see mango and bamboo, you have found a village. Mango is not natural in the jungle. If it's there it's because someone planted it. He noticed a platform and cleared it. He had found the foundations of a house. Using a machete, he removed thick vegetation to uncover the ruins of an ancient marae Bora Bora temple.

After his discoveries were televised, visitors coming to Bora Bora wanted to take the historic tour. He stopped working at the restaurant and become a guide. Now he could live the simple life of his dreams, just from hiking.


During the high season he offers four different Bora Bora walking tours through the lush, rugged interior island. The Bora Bora Valley of the Kings hike is the most popular. In the low season, when Bora Bora is quiet, he continues his research. 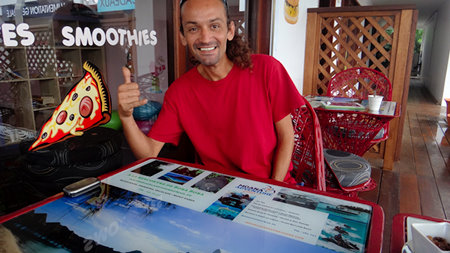 To date (January 2012) he has found 6 temples, 21 villages, 8 farms, and 2 tombs, which he estimates to be about 5 percent of the archeological sites. Many signs of ancient life have been uncovered in the Bora Bora Valley of the Kings area because the island's main village was originally located there.

Seeing the lava stone in the inner island prompted him to think of using it for cooking. He suggested cooking mahi mahi on lava stone to the Kaina Hut. Served this way the fish arrives sizzling at the table and delights the senses. Hear. See. Smell. Taste. Now Lagoon at the St Regis and a restaurant in the Four Seasons also offer this island dish. He brings lava stones back from the mountain for them. Stones must be porous to absorb the heat or they will explode. They can only be used for one night.

Home is Where the Heart is

When we met Azdine he had been in Bora Bora for 6 years. He lives in a modest, immaculate home, near the Kaina Hut, which he built himself from recycled materials. He said, "I haven't left, because every day I'm on holiday. I love my job. I don't need to go on holiday. I am on holiday". 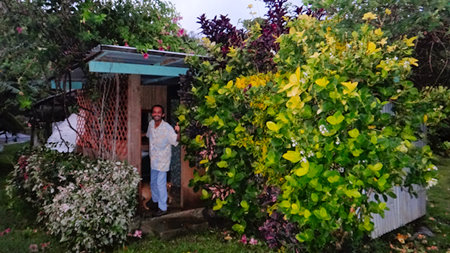 Aito, his cat, lounged on the bed as Azdine served us a glass of French wine and proudly showed us his dwelling. His outdoor shower hangs from a tree in his pretty garden. "When I stand in my shower I see my mountain" he tells us contentedly. Oh the romance! 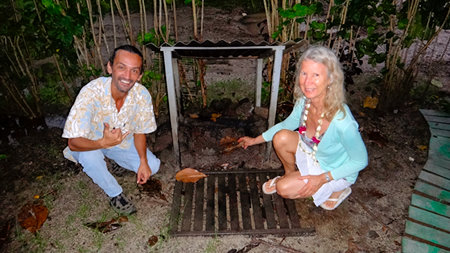 Having Azdine as a host had me checking my values and examining them afresh. He's an example for us all. Why struggle to pay a mortgage on a big house? Get a life instead!

We had contacted Azdine because we were keen to explore the famous Bora Bora Valley of the Kings. We were unable to do the walk as there was 4 days of rain in a row. Which is unusual even for the wet season in Bora Bora! But with his dynamic personality, Azdine conveyed a wealth of Bora Bora culture over coffee at the Paradisio, lunch at the Yacht Club and dinner at the Kaina Hut. His other favorite places when he's not on the mountain! I noticed that locals passing by respectfully referred to him as 'the guide'.

Hike The Bora Bora Valley Of The Kings

Want to do some adventurous Bora Bora hiking through the lush island interior? You can find a description of Azdine's tours, including the well known Bora Bora Valley of the Kings hike, on the Bora Bora tours page, along with contact details.