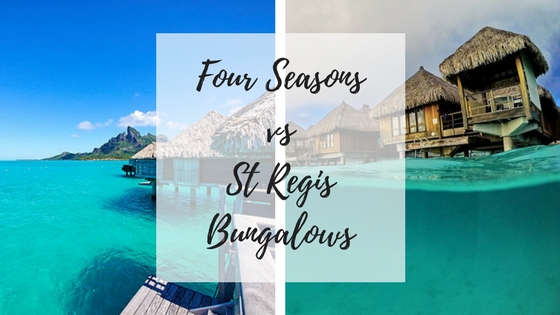 If you're deciding between St Regis Bora Bora vs Bora Bora Four Seasons for the best overwater bungalow stay, this recent comparison will make it easy to choose.

We picked one of Bora Bora's most popular months – June – to stay back to back at (what have been considered) the 2 top resorts and had a surprising St Regis Bora Bora vs Bora Bora Four Seasons over-water bungalow experience.

One stay had us wanting more, we were so sad when departing; but we were fine about leaving the second one and in fact moved to a fabulous new resort which is changing the limited St Regis Bora Bora vs Bora Bora Four Seasons focus! 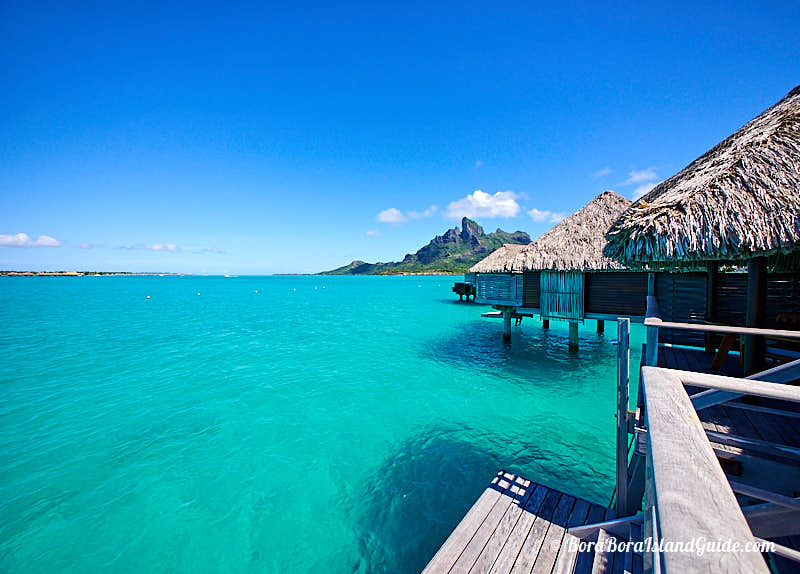 The design and layout of the Bora Bora Four Seasons overwater bungalows maximizes the views, while also giving a high level of privacy. They're elegant and spacious yet retain a feeling of intimacy; their lovely ambiance sets the scene for romance.

Each room has beautiful timber shutters, replacing the usual fussy curtains, and these open wide to wonderful lagoon views. We slept with them open, awoke to the turquoise water and soaked in the sensational bath - out of sight - marveling at the beauty of the lagoon. 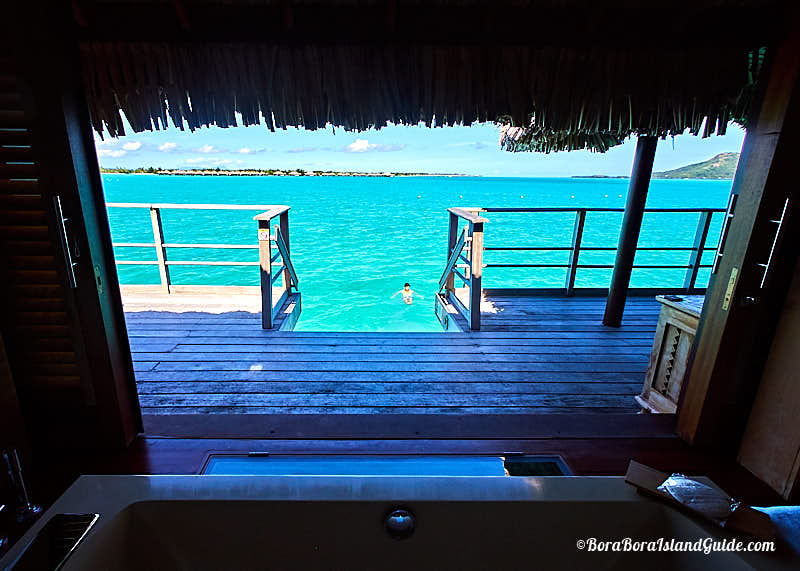 View from the bath to the lagoon

The deck was a perfect size for maximizing outdoor time and it's design enabled us to feel a close proximity to the lagoon while inside. With sun-lounges on one side, and a thatched roof dining area on the other, we enjoyed ultimate over-water private dining for lunch.

We knew every moment in our Four Seasons bungalow that we were over the Bora Bora lagoon – which was exactly what we had come for! 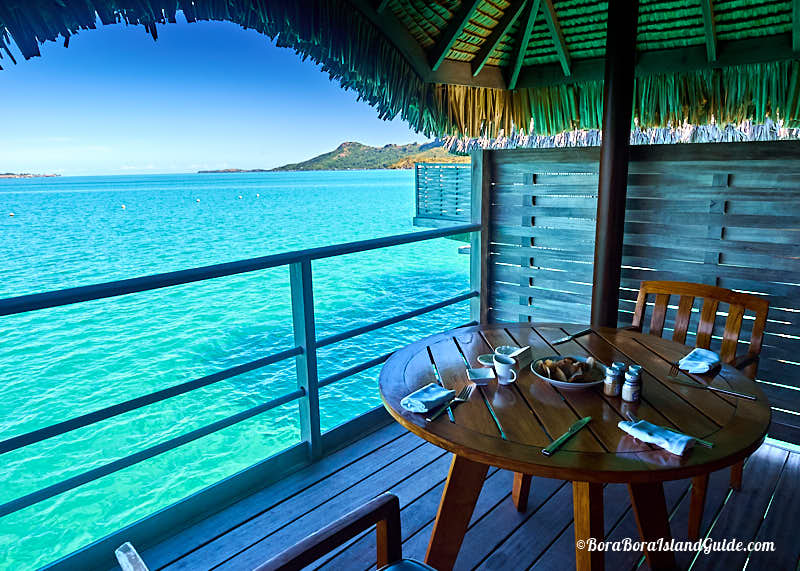 Dining alongside the lagoon on your private deck 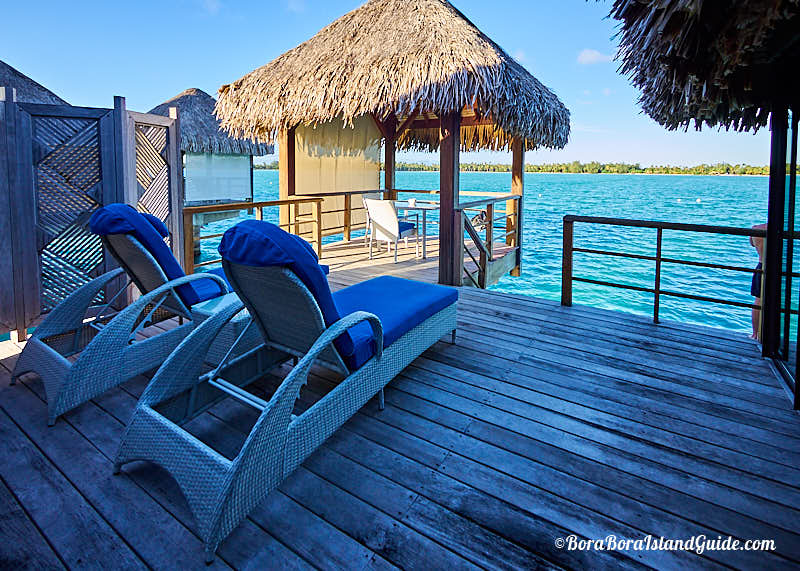 The size and the shape of the deck made the distance to the water seem far; and from the bed, the view to the lagoon was obstructed by the deck stretching past the area with sun- lounges to the thatched roof dining area beyond.

The St Regis bungalows do not have a view of the lagoon from every room, plus the humongous bathroom, with view-less frosted glass windows, was behind the bedroom.

Although it had a large tub, it didn't have the appeal of the Four Seasons, so on our 5 night stay went unused, except as a receptacle for wet towels.

It was 4 years since our last visit and we noticed that the bungalows had aged. The timber floors were so heavily scratched and worn that it felt like we were moving into a rental apartment, rather than a luxury retreat; and the furnishing covers looked outdated.

The water under the St Regis bungalows was a “cloudy” turquise, and there was a strong current sweeping from the motu towards Bora Bora Island; both of which made the lagoon less appealing for swimming. 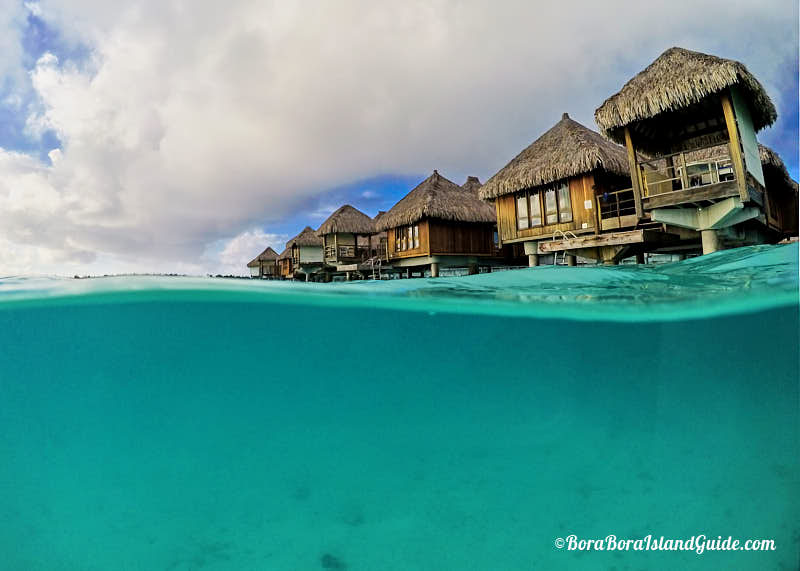 The water was very cloudy while we were staying

And the winner is...

If having a fabulous over-water bungalow is high on your criteria do check out the completely refurbished villas at Bora Bora's new luxury resort.

A huge part of your stay will be the location of your bungalow and it's view, plus the aspect you have walking to and fro, or while hanging out at the beach, the pool, and restaurants. This is the world's most beautiful island! Get clarity on St Regis Bora Bora vs Bora Bora Four Seasons regarding location and views.

It's worth knowing when to pay a little more to get much more, and when to pay less to actually get more! The choice of resort is the most critical decision for your Bora Bora vacation so read the elaborate discussion on St Regis Bora Bora vs Bora Bora Four Seasons factors in our soon to be released Best of Bora Bora. Leave your email address to be notified.

Contact our recommended Tahiti Travel Specialist for the best package, service and prices!