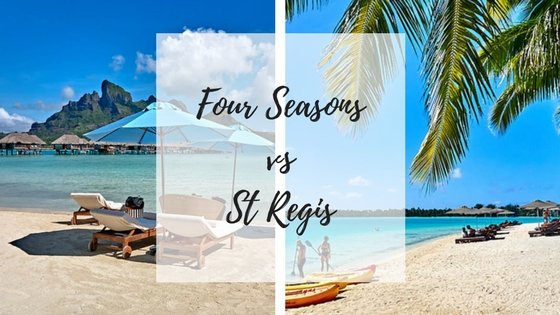 Which resort to stay at is the biggest decision you'll make for your Bora Bora vacation. So the most frequent questions, asked by those wanting optimal luxury, revolve around the dilemma of Bora Bora Four Seasons vs St Regis Bora Bora.

We recently stayed back-to-back at these two luxury resorts to make a comparison. Our findings were  astounding as we expected a close call. But there was an obvious winner in the Bora Bora Four Seasons vs St Regis Bora Bora debate!

Although the St Regis is situated very close-by to the Four Seasons in the lagoon, the motus that the two resorts are set out on are quite different and provide a very different outlook for guests at each resort.

The Four Seasons has incomparable scenic beauty as it has the most dramatic aspect across to Mt Otemanu, from all around the resort, of every resort in Bora Bora! 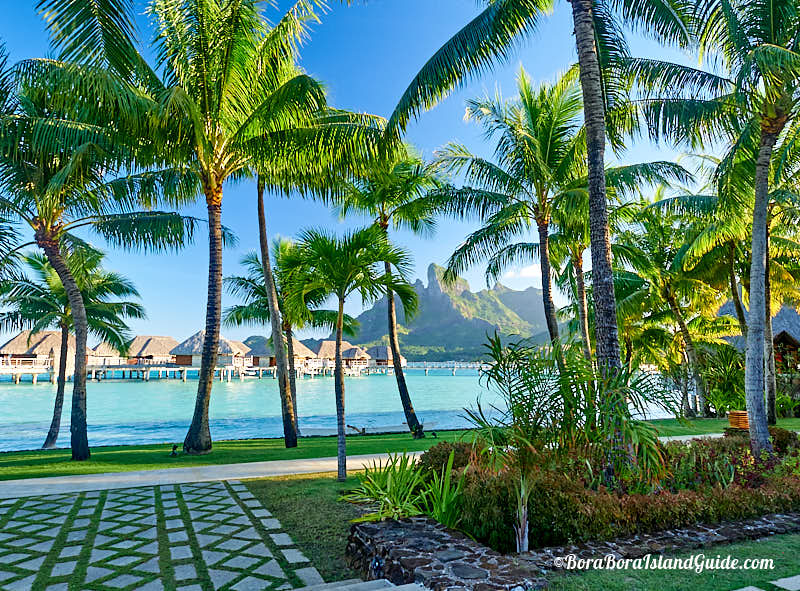 At Four Seasons we were reminded, every moment, that we were in Bora Bora! From our breakfast table we could see Mt Otemanu behind the soaring palm trees. Walking to and from our bungalow we enjoyed the famous view the entire way along the paths and over the bridges. It seemed that everywhere we went around this resort had the mountain view and from the beach, pool, spa, bungalow and restaurants we knew we were in Bora Bora! Plus, like most of the guests who hadn't booked a bungalow in the Mt Otemanu View category, we still had a view to part of the mountain from one end of our balcony. 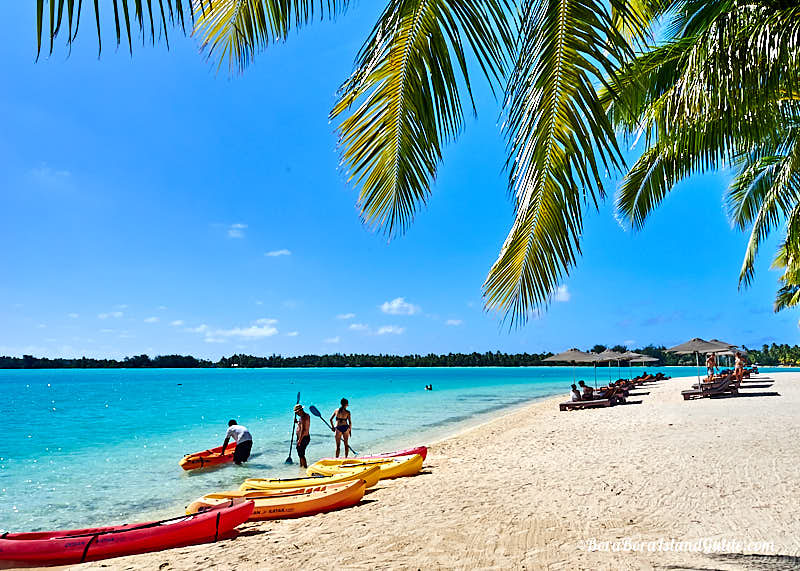 At the St Regis, unless you pay for a Mountain View bungalow, your could spend your whole vacation not really seeing Mt Otemanu - apart from when you arrive and depart from the dock.

At St Regis we had a lagoon view bungalow, on the long pontoon, facing back to the motu. We only saw tiny snippets of the mountain view flash between the bungalows of more fortunate guests on the opposite side as we rode our bicycles to and fro. We also saw a tip of the mountain view from the reception area when visiting the spa or if we walked out into the water at the beach and looked directly left to see it peeping above the motu.

Even our nights dining at the Lagoon over-water restaurant failed to reward us with a glorious Mt Otemanu sunset view, as it was overcast, and dining was moved inside for fear of rain. One beautiful evening we rode to the dock and sat there to watch the sun set behind Bora Bora Island. From the main areas of the resort: including the breakfast, lunch and dinner venues, the pool and the beach; we looked out to a corner of the lagoon with a backdrop of the palm-fringed motu, which frequently had smoke wafting from it.

The differences between the location and aspects of St Regis and Four Seasons are so big that we are surprised there's so much discussion about Bora Bora Four Seasons vs St Regis Bora Bora resort, as if they are on par. They simply are not when it comes to the views and outlook of the resorts.

Another significant part of a resort stay is your over water bungalow. See which Bora Bora resort's romantic bungalow seduced us at first sight.

The prices charged at Bora Bora resorts reflect that their beautiful grounds provide a virtually, all-inclusive vacation. There are astounding differences between these two resorts which determine the level of delight experienced at each, and will help you decide, quite quickly. For these distinguishing points about Bora Bora Four Seasons vs St Regis Bora Bora: beaches, pools, spas, complimentary activities, service, and food; see pertinent discussion in “Best of Bora Bora”.

We began our stay being “wowed” at the Four Seasons. Our knowledgeable travel agent had warned that we were starting with the best, and she was right. But here's the catch! The newly-opened luxury resort we stayed at after the Bora Bora Four Seasons and St Regis was so spectacular that we think the question should really be Which is better – the Four Seasons or the Conrad Nui? Find out why the Nui is now one of the best.