Yes there is public transport on Bora Bora - a bus called 'Le Truck' ; and no the island is not a permanent rave party from the large ratio of young people on the island - it's blissfully quiet and peaceful! 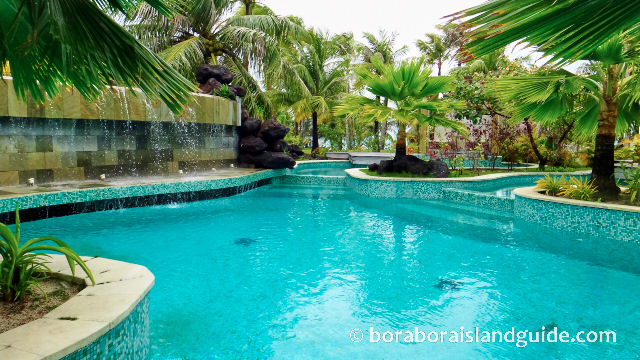 The St Regis Resort was the filming location of Couples Retreat

Here are the real top facts about Bora Bora:

•    Bora Bora is a tropical island lying in the Society Islands of French Polynesia. A territory of France, French Polynesia has 118 islands lying in five island groups. They're spread across an area the size of Europe.

•    Bora Bora's unique and sensational geographical formation is the (as yet unsunken) remnants of an extinct volcano.

•    The main island of Bora Bora is surrounded by a ring of sandy, coral islets called motus. Luxury Bora Bora resorts are set on these motus, and most have incredible views across the blue lagoon to the black-rock peak of Mt Otemanu which rises from the lush green slopes.

•    The main language spoken is French and the islanders speak Polynesian at home. We always find some folk speaking English in the places frequented by tourists.

•    The French influence can be experienced in the cuisine and some chefs create exotic gourmet dishes combining island ingredients.

•    Bora Bora has 3 small villages. Vaitape, the main one, located on the western side of the main island, has a post office, banks, and a variety of very small shops.

•    The average cost of an overwater bungalow is about $1000/night. This per night cost can be reduced significantly through a Bora Bora vacation package.

•    To fly to Bora Bora Airport you will first need to fly to Papeete on the main island of Tahiti.

•    To enjoy the other beaches you will need to stay at a resort or take a lagoon excursion that visits a private motu.

•    The Bora Bora lagoon only has  only one pass opening to the ocean; which is what makes this lagoon such a warm, calm place to swim and snorkel. The water temperature averages 28  degrees.

•    Bora Bora's airport is on a small island! For safety reasons planes can only land in daylight. Unless you fly in by helicopter, everyone must take a boat to get to their hotel.

•    Small cruise ships visit Bora Bora.  They must navigate slowly through the narrow pass into the lagoon and remain at anchor in the deeper water on the western side. The port is not large enough for a cruise ship to dock so tender boats ferry passengers between the ship and Vaitape wharf.

•    One inaccurate work of fiction has confused many people seeking luxury accommodation. The movie “Couples Retreat” was actually filmed at the opulent St Regis Resort Bora Bora although it appeared on screen under the name “Eden Resort”.

•    Of all the top facts about Bora Bora, this one is my favorite. It's why Bora Bora became my romantic get-away island. Hawaii gets more visitors in ten days than the whole of French Polynesia gets in an entire year! Bora Bora is exclusive.

•    I also love that Bora Bora has no dangerous creatures such as snakes or spiders. I can relax and enjoy the sublime environment, whereas back home I have to watch out for creepy crawlies!

By browsing around this “been there, loved that” site, you will discover many more top facts about Bora Bora, Pearl of the Pacific.