Learn about the process of growing Tahitian vanilla to understand why this highly prized, delicate, and versatile spice is worth buying, even though it costs more than artificial vanillin.

Vanilla seeds will not germinate in the absence of specific mycorrhizal fungi so growing Tahitian vanilla begins by taking plant cuttings with at least 6 leaf nodes.

In the wild the vanilla vine grows up already established plants, for support. Forty percent of farms growing Tahitian vanilla are still planting in this natural style and sixty percent have huge shade houses where the vines are trained to grow up posts, which is more efficient, but the romance is lost. 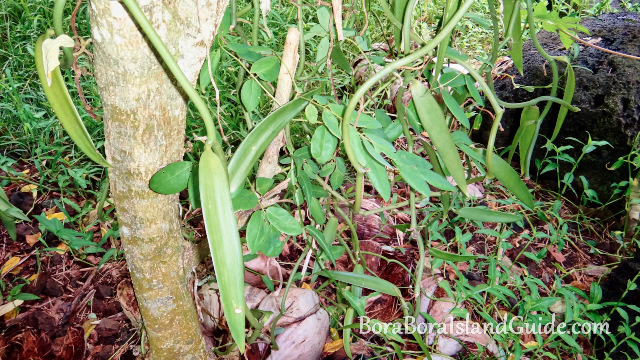 A vanilla vine growing up an established tree

To thrive, vanilla plants need a hot, humid climate; 50% shade; and nutrient-rich, organic compost on a loamy, well-drained soil. The ideal time to plant vanilla cuttings is from September to November. The first flowers bloom 3 years later. If a flower is fertilized, a bean begins to develop in 5 to 6 weeks and takes 6 months to mature. Each vine produces pods for 12 to 14 years.

Untended, the vanilla vine will grow as high as it's support allows but produce few flowers. Farmers have learned to fold the high parts of the plant down to stimulate flowering, and this also keeps the beans accessible to pickers.

Each vanilla flower has both male and female organs, separated by a membrane which prevents self pollination. This mysterious structure prevented entrepreneurs from growing Tahitan vanilla outside of Mexico for hundreds of years, as pollination was done by only one species of local bee. Now a farm worker simply uses a sliver of bevilled bamboo to lift the fine shield between the anther and the stigma, then transfers pollinia from the male anther to the female stigma with a thumb.

Tahitian vanilla orchids flower during the months of June to September, which is summer in Tahiti. Every plant must be checked daily, starting early in the morning, as each flower only last about 6 hours.

Perfect conditions are necessary for growing Tahitian vanilla successfully. Excess water without sufficient drainage, over-pollination, and too much shade, make it susceptible to fungal and viral diseases, which can be controlled with sprays or biological  means. Diseases are spread through the sap so all affected plants must be destroyed.
Pests must be managed. Insects can attack the flowers. Caterpillars and slugs eat young, tender shoots, buds, and fruit. And grasshoppers may damage the shoot tips on new cuttings. It's easier to implement organic methods of growing Tahitian vanilla in shade-houses where there is greater control over the environment.

The fruit pods are picked when a pale yellow discoloration occurs on their dark green surface. For maximum flavor, each bean is picked as it ripens. So harvesting is a time consuming daily task, just like the pollinating process.

To stop growth and create enzymatic reactions, which release the fragrance, the harvested Tahitian vanilla pods are washed in cold water and heated in the sun or an oven.

Traditionally, Tahitian vanilla beans are placed on hot metal sheets and exposed to the hot sun from 10am until noon. Next they're wrapped in cloth or paper and placed in large wooden boxes to sweat. This is repeated daily until they have lost 65% to 70% of their moisture. 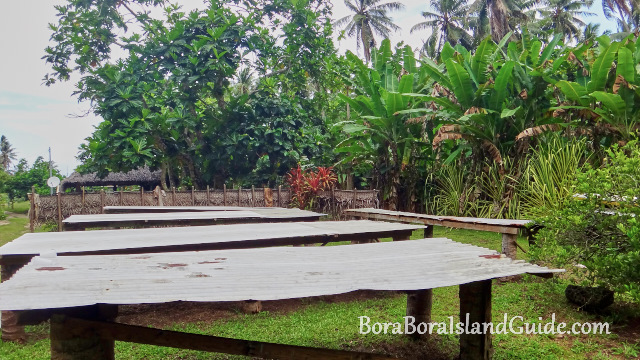 Today some producers growing Tahitian vanilla spread beans on wooden racks in a hot room, for up to a month. This avoids the inconvenience of rain. During this stage some sun exposure may be incorporated.

Beans are first sorted according to their size so that they dry evenly. This prevents some from losing their precious vanillin content while the larger ones are still drying. Drying is a critical process to prevent them rotting and seals in the aroma.

Next the pods are placed in sealed wooden boxes for 6 months while the fragrance develops.

Tahitian vanilla pods are graded according to the European standard: 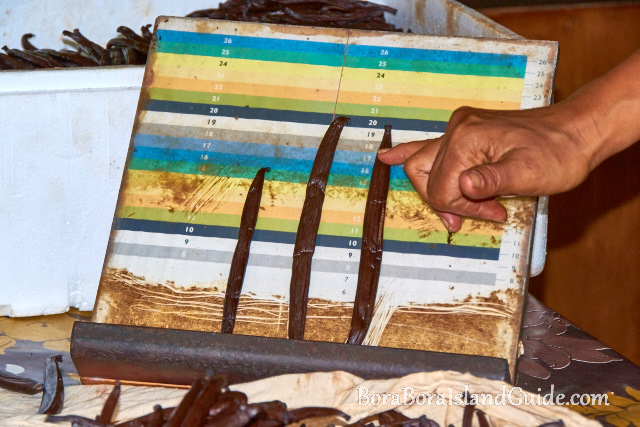 Grading the length of the vanilla beans

Where to buy Tahitian vanilla

Look out for the little sealed bags of top grade, export quality beans for sale at Papeete markets in Tahiti. Don't be phased by the cost as the prices represent honest labor. If you buy vanilla beans at a farm you'll  pay a slightly cheaper price.

Learn More About the world's second most pricey spice

Know how to cook with this versatile spice by exploring the many culinary uses of Tahitian vanilla.

Peek into the history of Tahitian vanilla and you'll find it's as exotic as the spice.